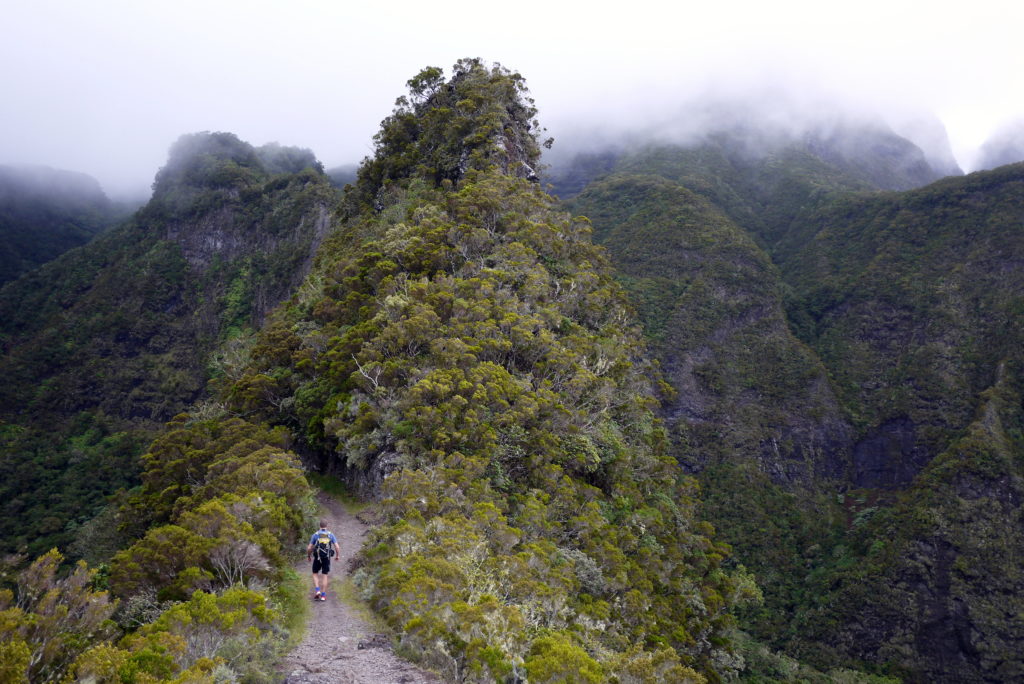 It’s almost noon. Daniel and I have increased our speed the last hours to make the appointment. The race organization will pick us up at 12.00 and we are unsure how close to the summit we are due to the heavy fog we just entered. We are close to sprinting the last climb up to Le Maido when we suddenly meet a man and a woman on the trail in front of us:   –Daniel, Kristin?! Good to see you!

24 hours earlier, Yann – the Race Director behind Citroën SwimRun Réunion, picked us up at the airport on the other side of the island. Yann offered shower and a map, and drove us up to the rim of Mafate Cirque, a massive crater valley. From here on we left all roads and amenities behind us and entered a landscape with more than 200km hiking trails, some very small “villages” and an AMAZING scenery. 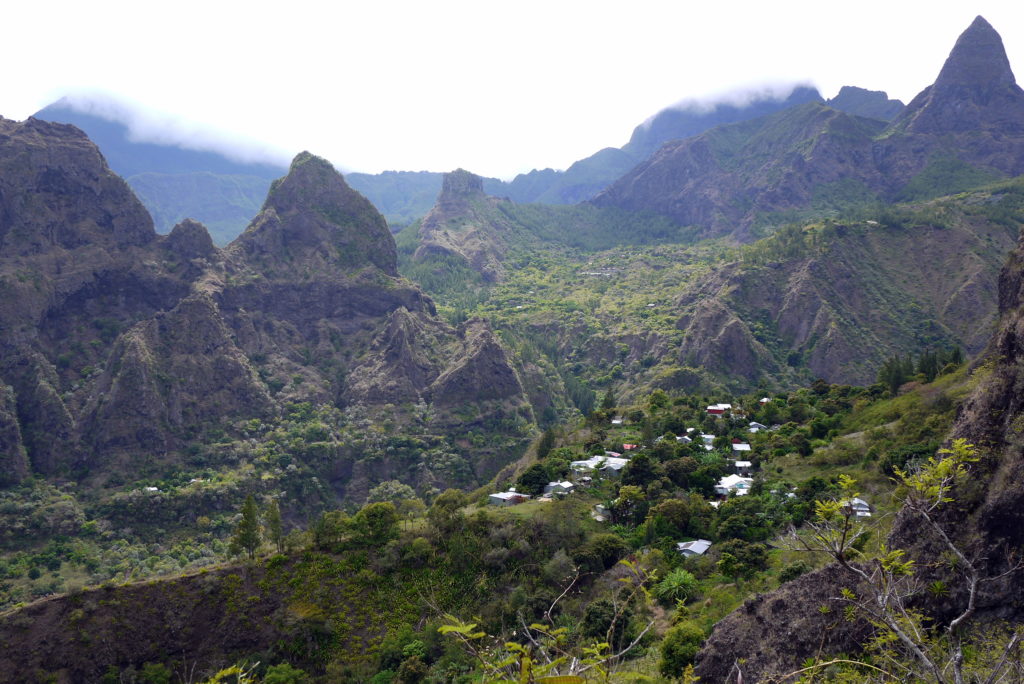 After we crossed Mafate by foot and met the race organization at Maido, they took us down to the coast to the press conference at Citroën Centre (main sponsor of the race). We got the opportunity to meet the famous athletes David Hauss and Cédric Fleurton and talk to the local newspaper and TV. We were also offered a car to keep for the rest of our stay to continue exploring the island after the race. 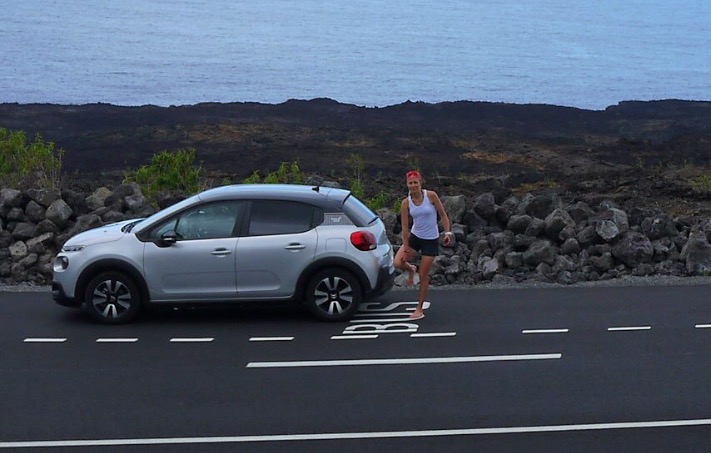 Coming down to the coast from the mountains meant a huge difference in temperature. At lunchtime, the next day, we got a sense of how it will be to race in 30+ degrees without any shadow. Hot! Water temperature was 25 degrees and did not offered any cooling. But it didn’t really matter as it was so nice to not freeze while swimming. 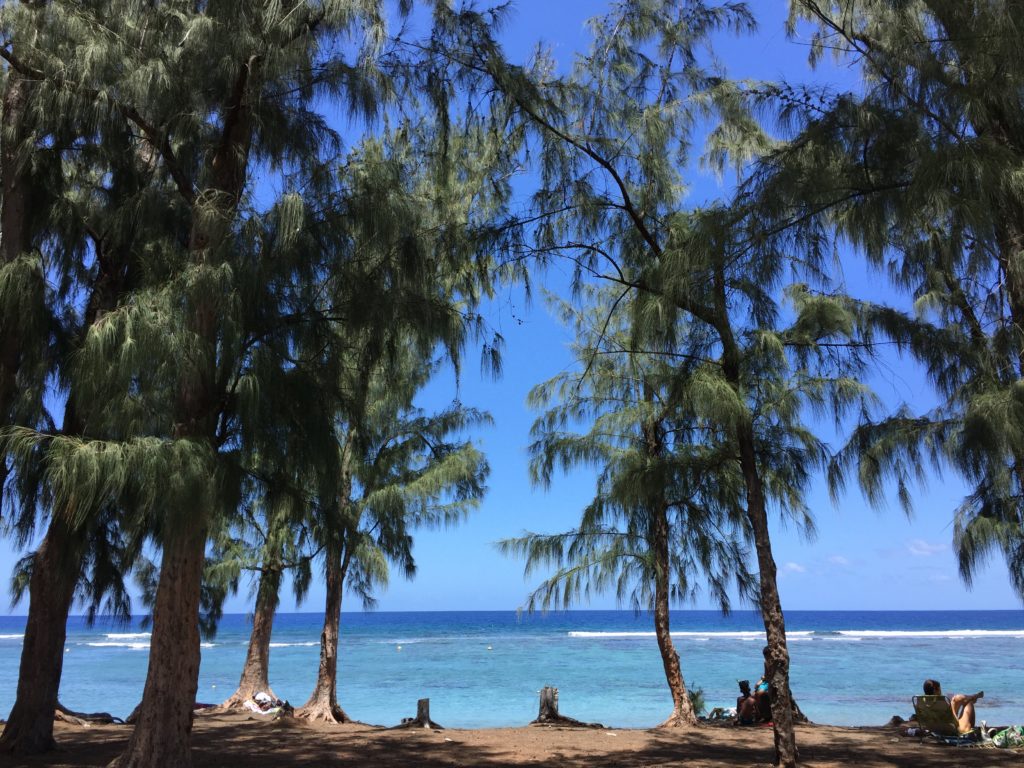 At race day we all gathered at Saint-Gilles-Les Bains in the morning and temperature was already rising. We were a strong field of 220 swimrunners ready to start the 24 kilometers of running and 6 kilometers of swimming along the West Coast. It was a strong lineup including two Olympic triathletes and an Xterra winner. 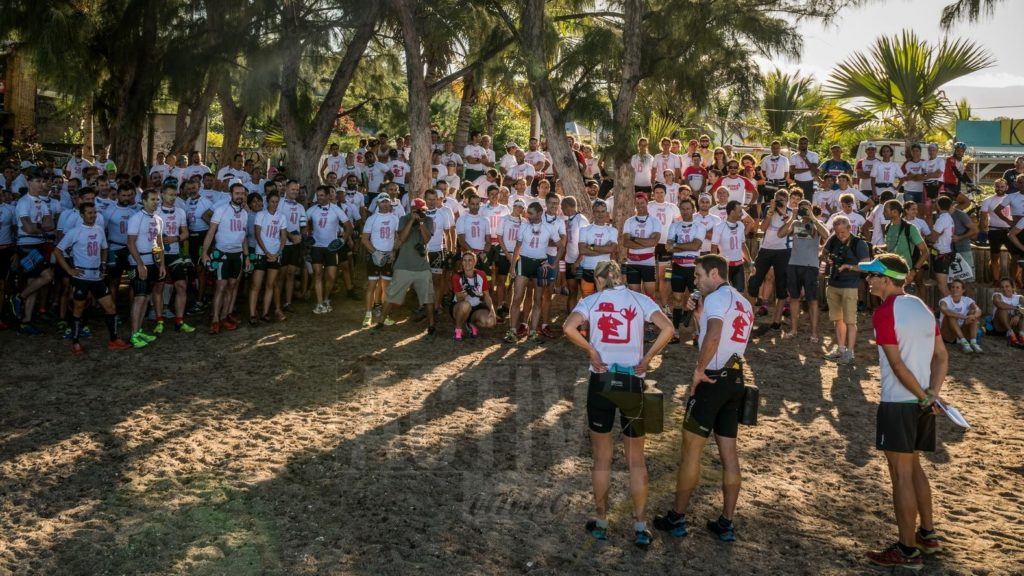 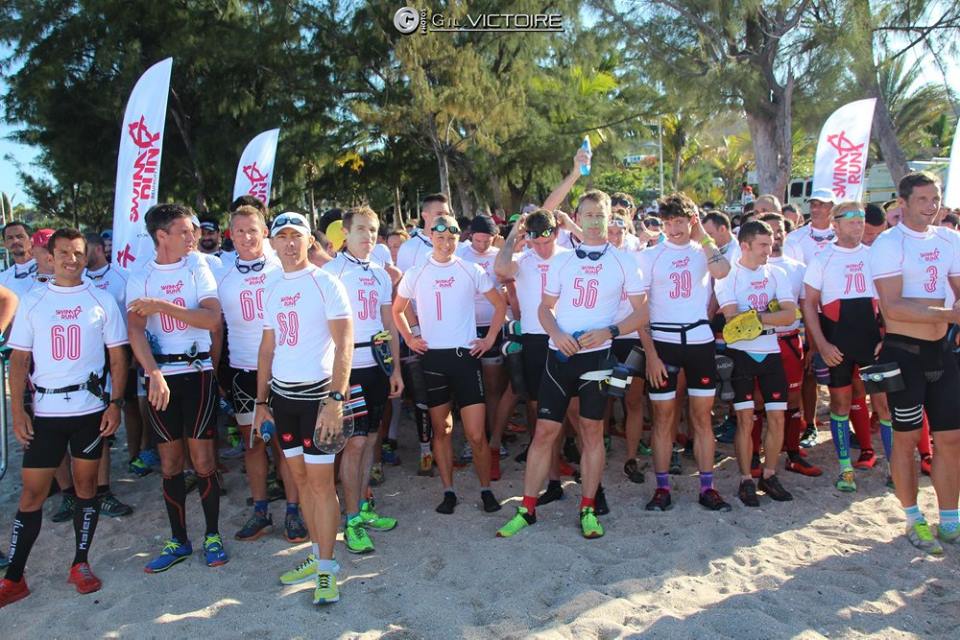 The race started with a 6 kilometers beach run. David and Cédric took off and were flying above the sand. Daniel and I were running in the chasing group of 4-5 teams. 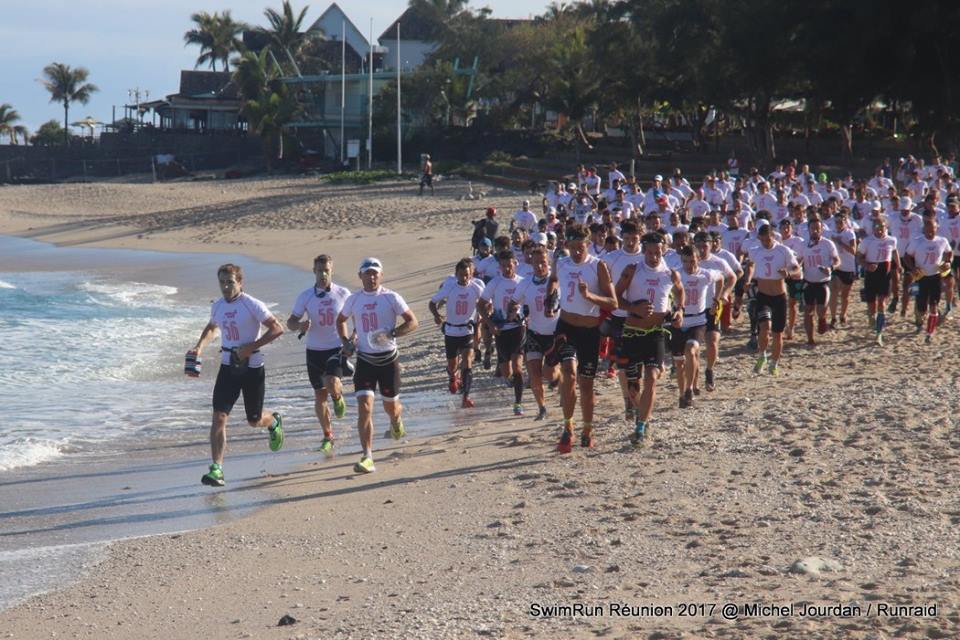 It was hard to find the best line to run along the beach and sometimes it was better to run just at the water line. Anyhow, running on sand beaches is tough so I was soon looking forward to the next section, almost 3km swimming with just some short beach runs in between. 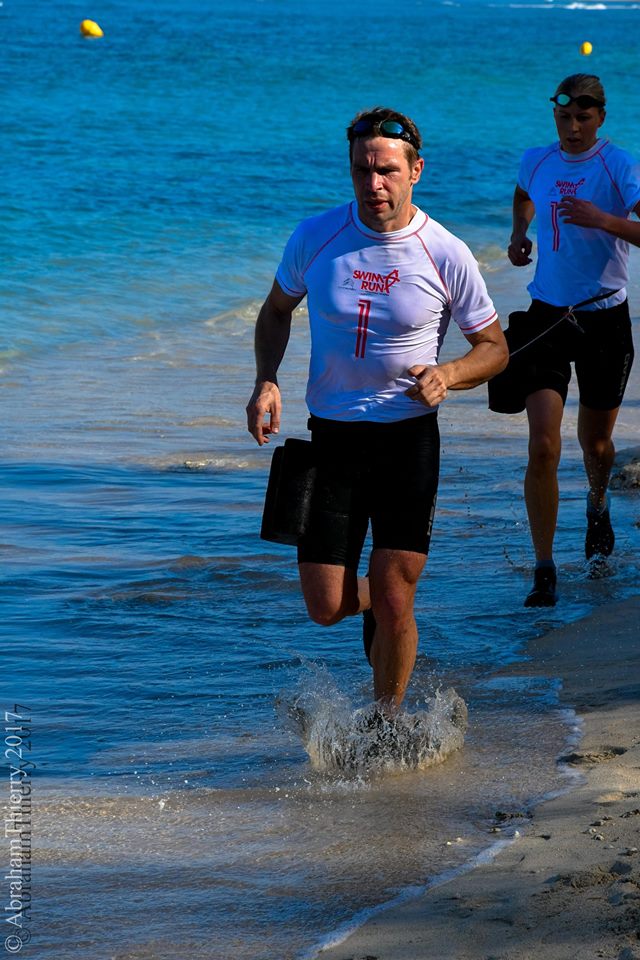 The first swim was 1600 meters but felt like 300 meters. It may have been all the colorful fishes and corals that stole some of my attention. 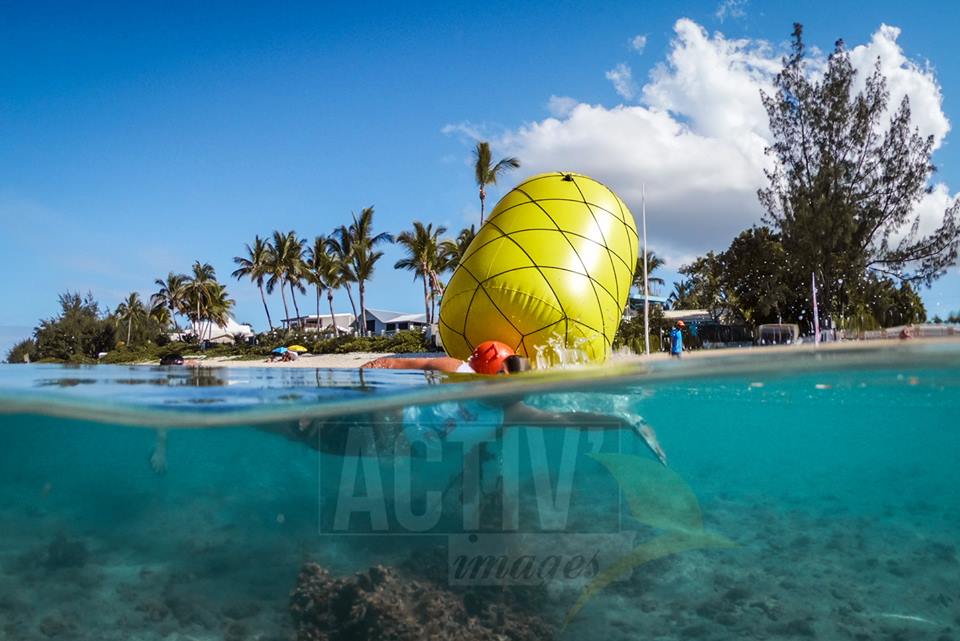 As Reunion Island is one of the most shark infested spots in the world with many deadly attacks since 2011, all swimming/surfing outside the coral reef is forbidden. That meant that all swimming took place in the lagoons inside the coral reef. A fantastic experience for us who are used to swim in pitch black lakes. 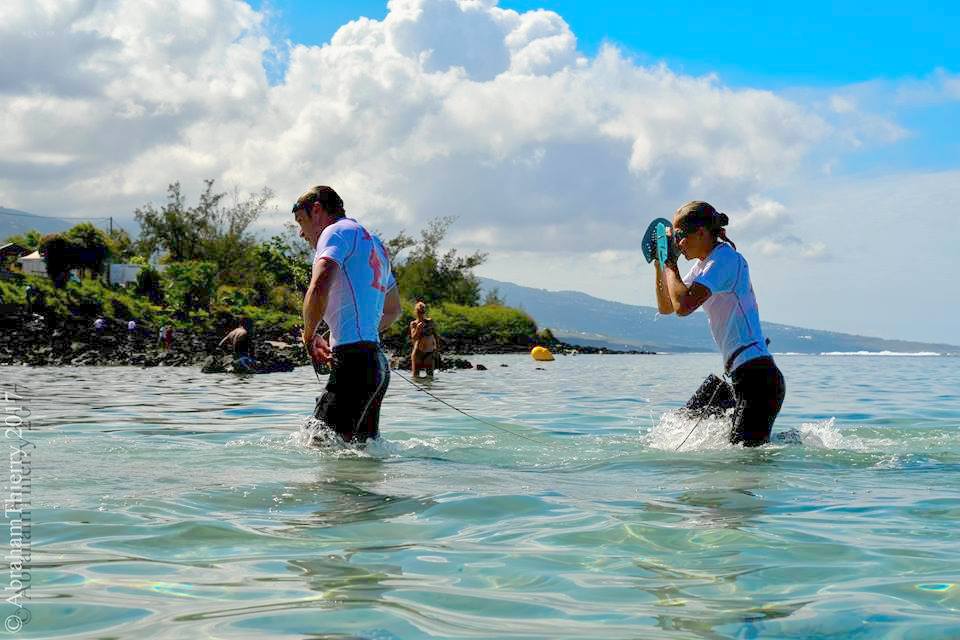 During one of the swims a man at the beach suddenly started waving and shouting to us. We stopped and looked up. My first thought was sharks!! But the man just wanted to direct us closer to the beach as the water was deeper there. 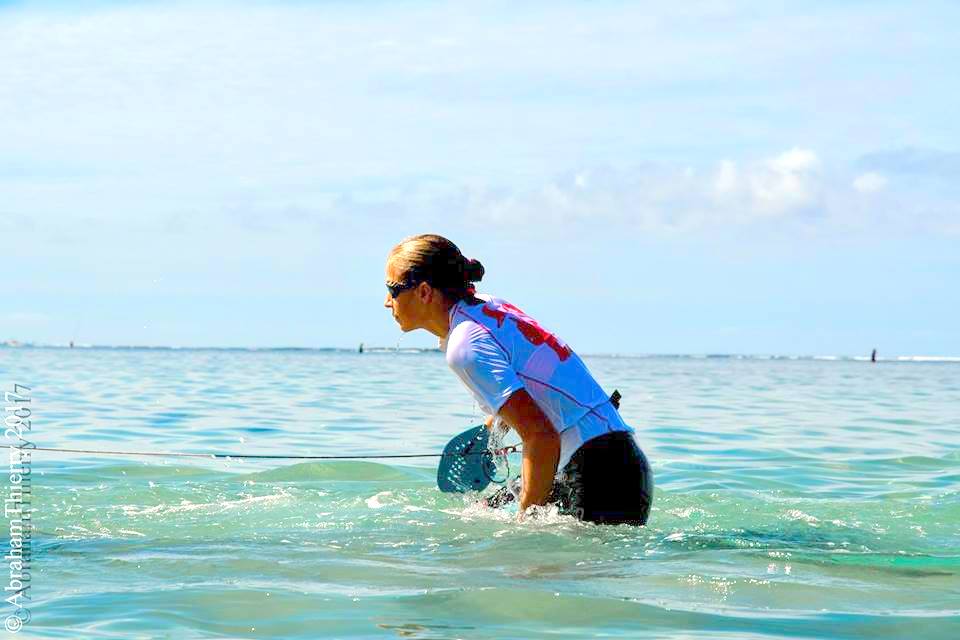 Swimming in coral reef meant a new challenge for us as we had to find the best way through it. Sometimes we were so close to the corals that we were almost touching them and we could not just swim straight but had to navigate our way forward where it was deep enough to be able to swim.

By the end of the race we were racing close together with a team with great trail runners, the young Arnaud brothers. I  love the excitement of racing close to other teams. 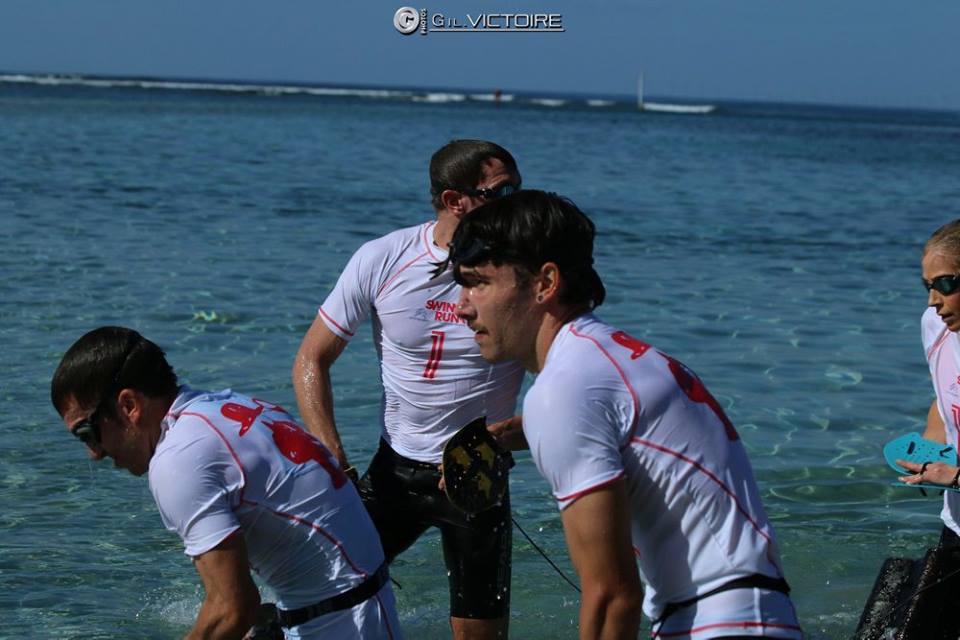 The last section included two shorter swims and a 5 kilometer run. We had some advantage but we could see them behind us. Daniel started to get overheated and were slowing down. I got nervous that the strong runners would soon pass us but I felt strong and pushed harder so we would not get caught. 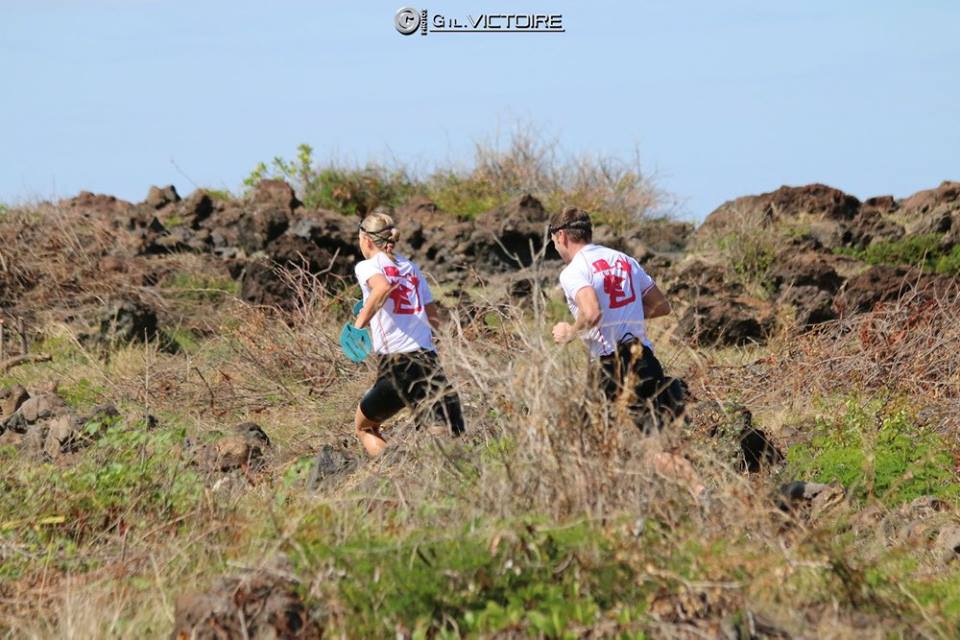 We managed to keep our lead all the way to the finish line and finished just two minutes ahead of them. 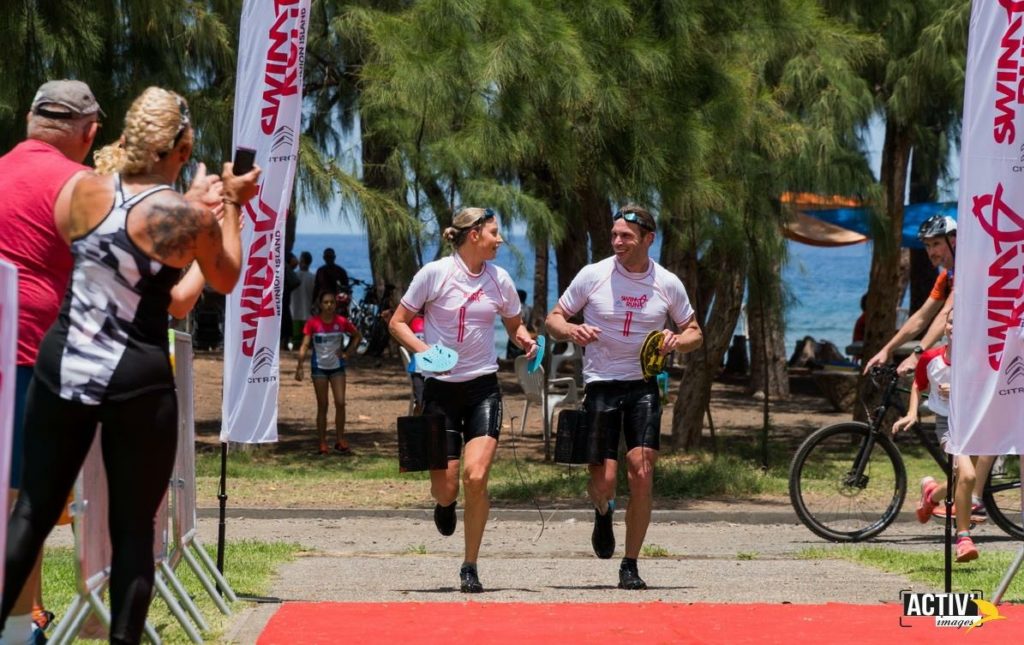 David and Cédric took the overall win and we were super happy to be the first mixed and second overall team to cross the finish line.

The race organization had made a great job; the course were clearly marked all the way with many volunteers along it and the finish area gave the feeling of a big party. 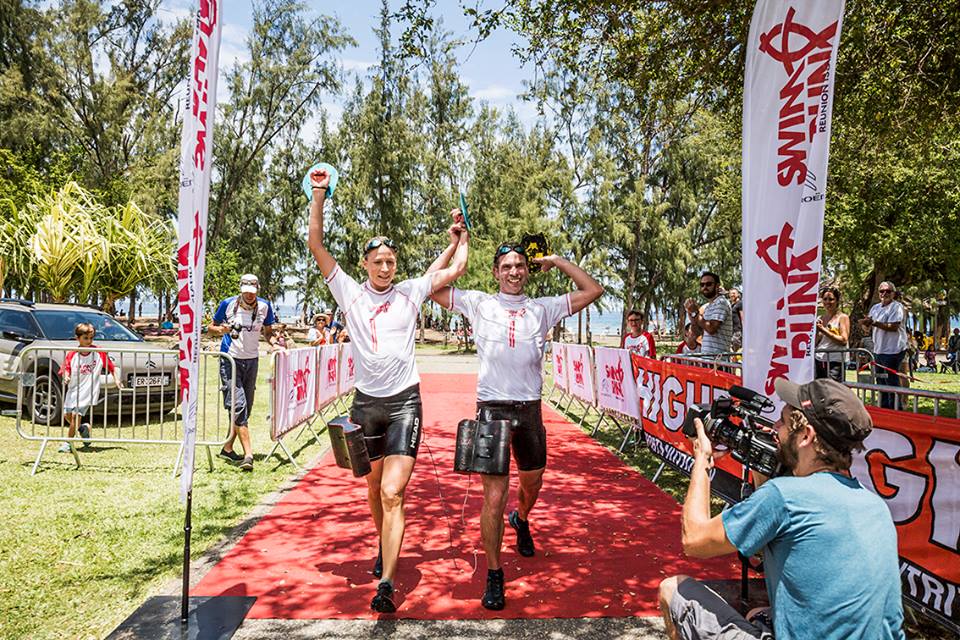 The race took about four hours but we felt good afterwards and after the price giving ceremony we drove straight up to the mountain village Cilaos. Or straight might not be the correct word. The road up to Cilaos is well known for its 450 hairpin bends. It was  also heavy trafficked and a heavy rainfall that started a rock fall on the car next to us made the journey even more exciting. 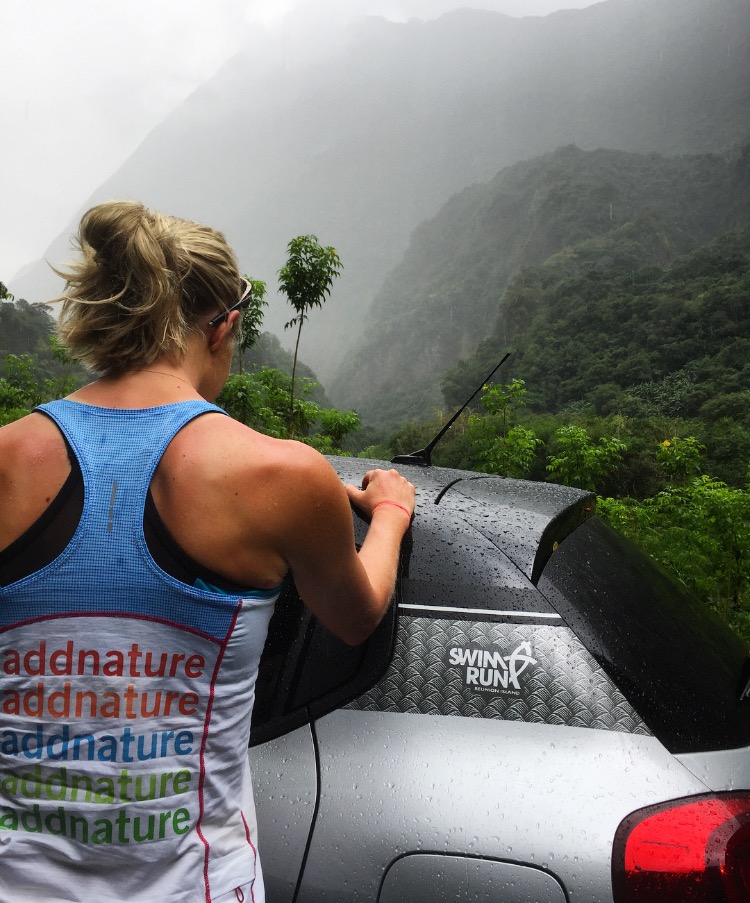 Arriving to the little village Cilaos made it all worth the adrenaline filled drive though. We stayed at a fantastic place and enjoyed the evening there, but prepared for an early morning. We set the alarm at 5 but we both woke up at 4 the next morning. We (or at least I) were happy to start our climb to Piton des Neiges earlier than planned. 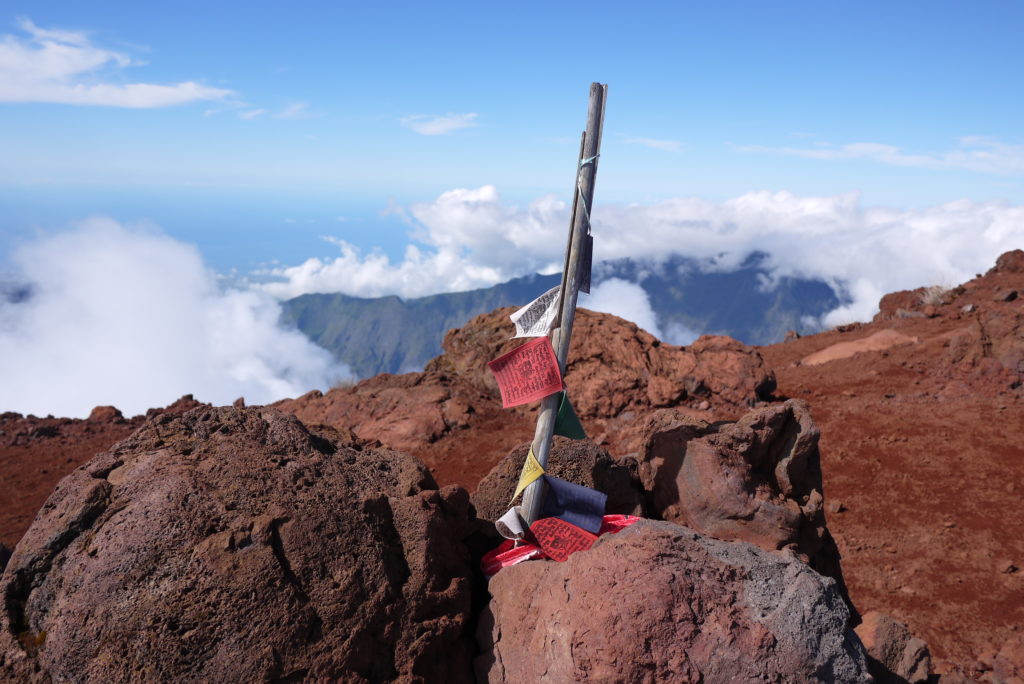 Piton des Neiges is a 3070m high volcano, the highest point in the Indian Ocean. Most people hike up to the peak in two day as they sleep in a Gîte 2500 meter above the sea and start the last ascent very early to see the sunrise. Even though we were not aiming for the sunrise it was still good to get an early start to reach the summit before the clouds. 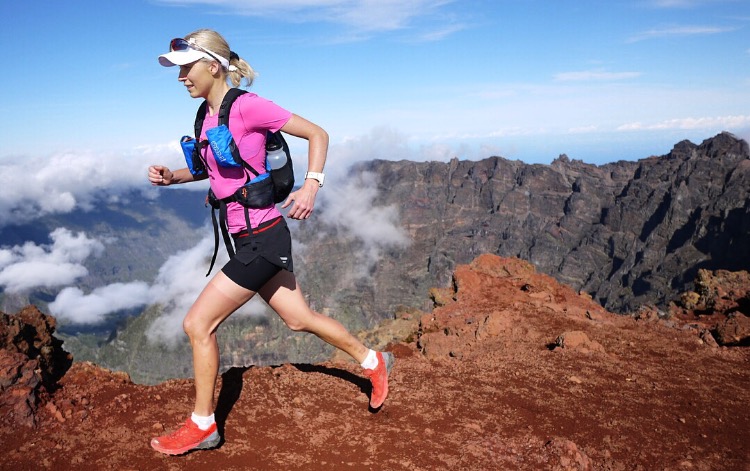 On our way up we were lucky to meet all sunrise hikers on their way down. This meant that we got to enjoy the peak all by ourselves for some hours. As we had no rush going down we even took the opportunity to take a longer nap at the summit. We woke up by a rather strong sun and realized that we probably needed to get down below the clouds again to not get sunstroke. 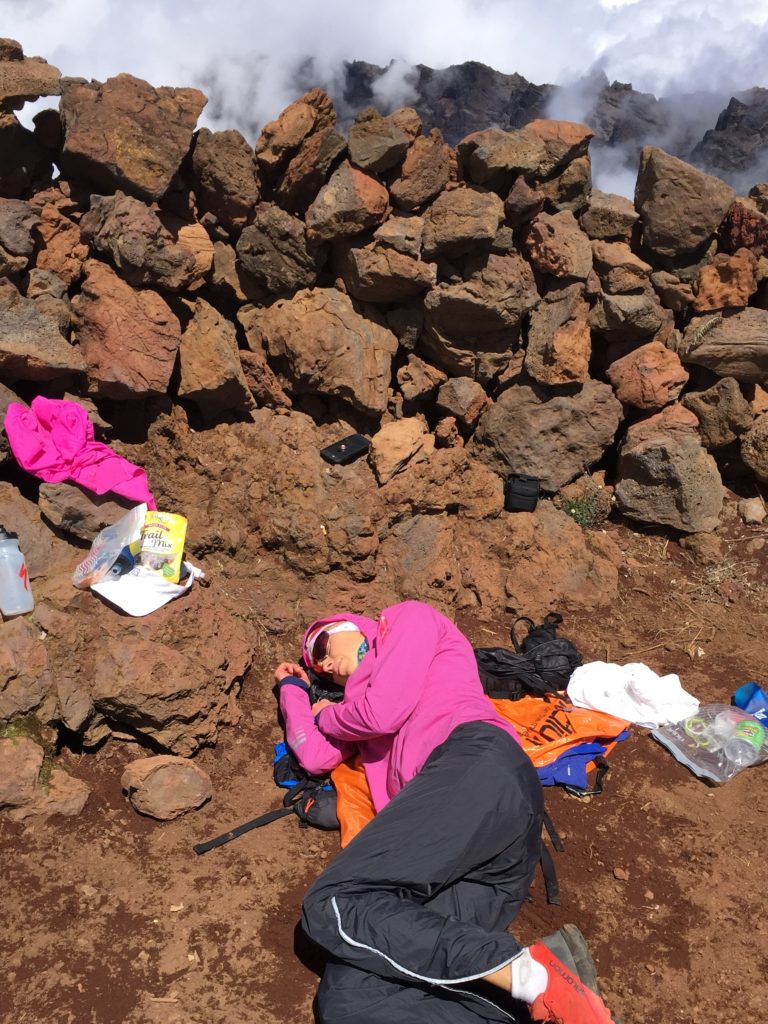 I wish we could have stayed another week(s) in Cilaos but in the afternoon it was time to face the 450 bends again. At least there was no rain this time. We arrived at the South coast in the evening and got the opportunity to spend some more time with David and Elise who we met 5 days earlier at the summit of Maido. This couple raced ÖtillÖ in Stockholm in September. They were lucky to catch one of the extra released spots and therefore only got 5 weeks’ of preparation.

Swimrun on Reunion Island was different from what we are used and I tried to prepare by doing hot yoga and other training in 40 degrees. It’s different for us but not really hard to adjust to. These guys on the other side, are used to swim in water temperature of 25 degrees and had to adjust for a race with water temps slightly above 10 degrees. Listening to their story and how they prepared for the ÖtillÖ race makes me impressed by their performance in the Swedish Archipelago.

We got the opportunity to join David and Elise for their morning swim in the ocean the next morning. It became more of fish spotting than swimming for us tourists though. 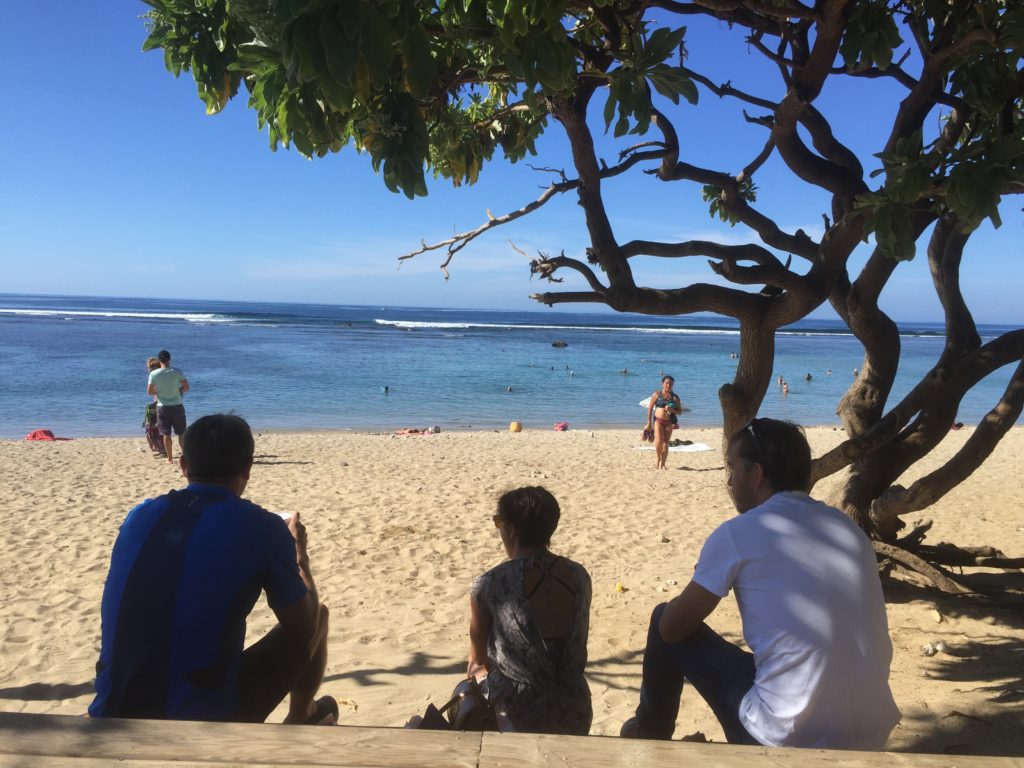 The rest of our last day we spent bathing in waterfalls, visiting a beach with green sand and driving on roads over fresh (2007) lava fields. 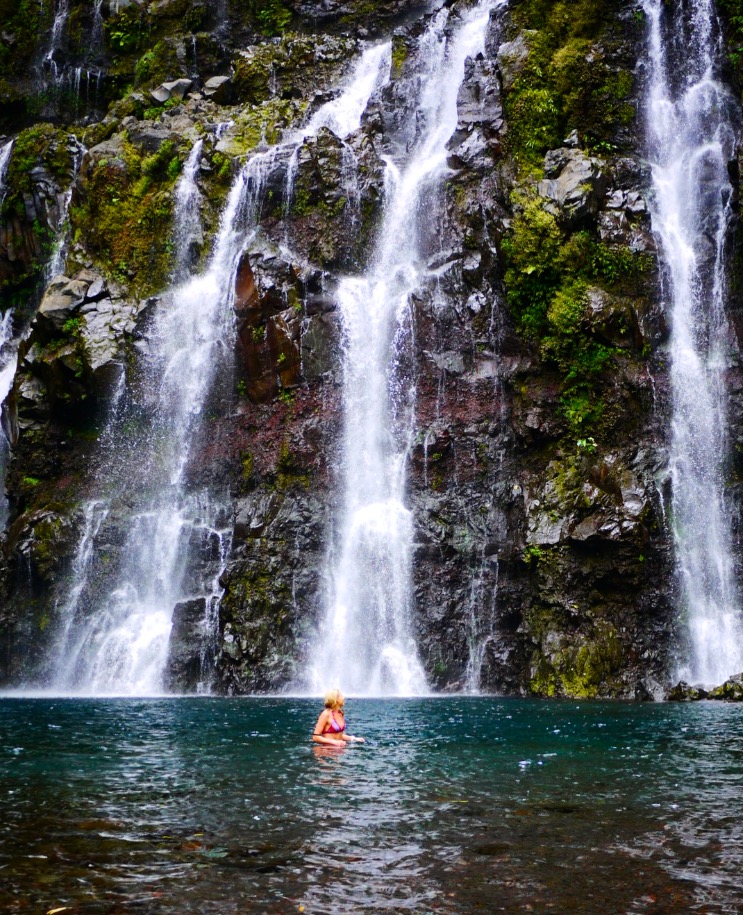 Our tour then ended as it once started six days earlier. Yann, the race director, met us at his place where we repacked, had a shower and then he dropped us off at the airport. Best support and hospitality from a great swimrun community on the other side of the globe. Thanks! 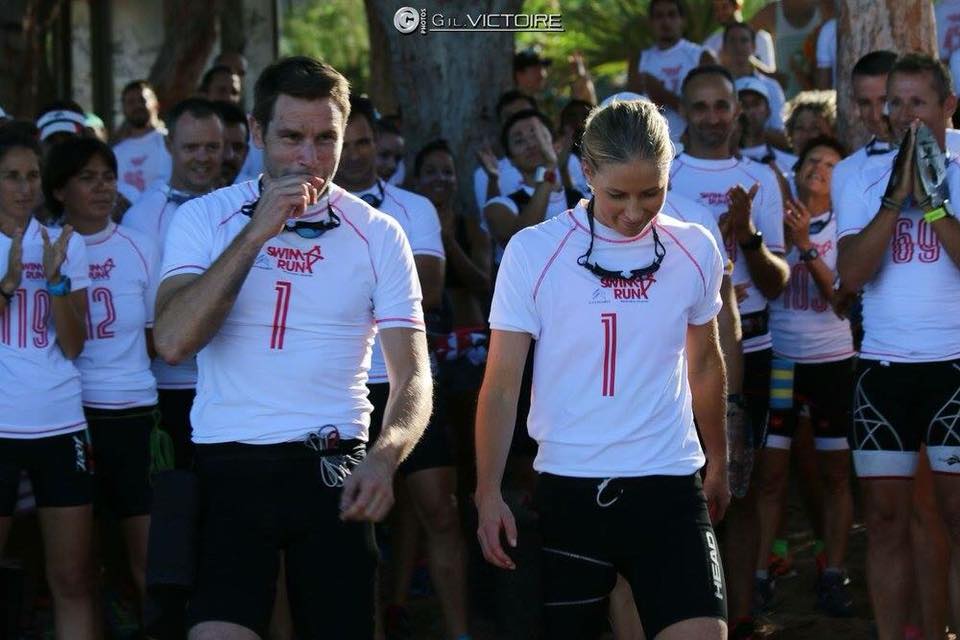